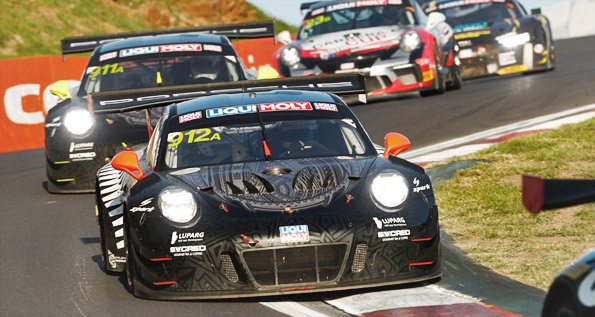 Stuttgart. has won the Bathurst 12 Hour (Australia) for the first time, and has added another chapter to the impressive success story of the 911 GT3 R in its final performance at a major endurance race. Works driver Dirk Werner (Germany) as well as the two Young Professionals Matt Campbell (Australia) and Dennis Olsen (Norway) brought the GT3 car fielded by EMB over the line in first place. The fledgling customer team managed by works driver Earl Bamber (New Zealand) triumphed at its maiden outing on an international stage in the fight against experienced teams from eight manufacturers.

In a breathtaking finale on the Mount Panorama Circuit, local hero Campbell ultimately beat his top-league rivals, to the great delight of his fellow compatriots in the grandstands. In the final 20 minutes of the 12-hour endurance race, the Young Professional picked off three vehicles one after the other and with perfectly-executed manoeuvres swept into the lead with the No. 912 911 GT3 R. His teammates, Werner and Olsen, drove strong stints and his EMB team worked flawlessly with a perfect strategy to lay the foundation for this victory.

Lady Luck, however, was not shining on their team colleagues Romain Dumas (France), Sven Müller (Germany) and Mathieu Jaminet (France). From the half-way point of the race, the driver trio in the 911 GT3 R swapped the lead with the sister vehicle over long stretches, however the No. 911 car did not see the finish. With three hours left to go, a problem with the power steering hampered the charge of the fast and consistent GT3 vehicle and forced it into the pits.

The 911 GT3 R fielded by the customer team Competition Motorsport/McElrea Racing retired after an accident of David Calvert-Jones (USA) early on in the race. Jaxon Evans gave an impressive performance at his maiden outing as a Junior. The New Zealand shared the No. 12 vehicle with works driver Kévin Estre (France) and Calvert-Jones. The identical GT3 car of the Black Swan Racing squad could not contest the race due to an accident during practice.

For the opening round of the 2019 Intercontinental GT Challenge 2019, the 2018-spec version of the ca. 500 hp GT3 car was campaigned for the final time, as stipulated by the rules. Included on the Weissach racing car’s extensive list of successes is an overall victory at the Nürburgring 24-hour race as well as titles in the ADAC GT Masters and the North American Pirelli World Challenge. From the second race of the season in Laguna Seca (USA), customer teams will again race the new version of the vehicle, which celebrated its race debut last weekend at Daytona (USA). The new 911 GT3 R features numerous improvements in terms of driveability, aerodynamics and kinematics.

In the Class B of the 12-hour race in Australia, the customer team Grove Racing scored a comfortable lights-to-flag victory. Ben Barker (Great Britain) and the father-son team Stephen and Brenton Grove (Australia) secured first place with the No. 4 911 GT3 Cup ahead of the same model vehicle run by the Cup Asia squad.

Fritz Enzinger (Vice President Motorsport): “What a banner day for Motorsport. Congratulations to all drivers and particularly to the team principal, Earl Bamber, who has impressed me greatly with his fortitude and meticulousness over the years. Earl is not only a world-class racing driver, he’s also a top team boss. He underlined this today. It’s perfect that the fledgling EMB team has handed us the first victory at Bathurst at the swan song of the 911 GT3 R after three very successful years. Now we are looking forward to the second race of the season at Laguna Seca. We aim to bring home the next win with the new car.”

Pascal Zurlinden (Director GT Factory Motorsport): “We still had some unfinished business at Bathurst, and now it’s settled. For our proven 911 GT3 R to win at its last major race, we couldn’t have dreamed for a more wonderful finish. I take my hat off to our drivers, who had to fight in sweltering heat. And we mustn’t forget the customer team Earl Bamber Motorsport. This was the first race at this level for EBM, they tackled it with a top-class, experienced crew and promptly won. This could be the first chapter of an epic story. We look forward to further joint outings. Now we’re looking ahead and preparing ourselves for the next two big events for Motorsport: the doubleheader in Sebring with the WEC and IMSA and the next round of the IGTC in Laguna Seca.”

Sebastian Golz (Project Manager 911 GT3 R): “This finale was breathtaking. We focussed our entire race strategy on this last stint. The team prepared for it perfectly, and the drivers implemented it perfectly. At the end we fitted fresh tyres, filled the tank and put Matt Campbell in the car – then full attack to the finish line. This victory at the last big race is a fair reward for the very successful 911 GT3 R. Such a farewell before the car heads into the Museum rounds off the success story perfectly. The EBM team did a sensational job, as well. The squad was put together at short notice with unflagging commitment and great meticulousness. The fact that they promptly scored a victory is phenomenal and a consequence of the professional work.”

Earl Bamber (Team Principal EBM): “We only began putting the team together at the beginning of December. Since then we’ve invested a huge amount of work into this project – not just me, but my brother Will and many other supporters, as well. Our goal was to be able to offer the drivers two equal cars at the very highest level. We succeeded. The No. 911 led over long stretches but then fell back. But we had a second iron in the fire. The No. 912 stepped up to the mark. What Matt achieved in his last stint is film worthy. The fact that we now send this car into the Museum with a victory makes it all the more emotional. I’m completely over the moon.”

Matt Campbell ( 911 GT3 R #912): “I knew without doubt in the finale where the strengths of our car lay – and I then used them consequently. I eyed up my competitors, I made my overtaking moves resolutely and never backed off. That was an important key to this victory and I’m overjoyed. Bathurst is a legendary race, and it’s my home race. It was the first GT3 race for Earl Bamber’s team. To win at the first outing and in this manner is simply brilliant.”

Dirk Werner ( 911 GT3 R #912): “This is a great victory. I’ve waited a long time for such a success at a major race. There are so many special stories from this race. It was the maiden GT3 race for Earl’s team, it was the last race for the 911 GT3 R and not least there was Matt Campbell’s performance, he really turned up the heat at the end. It was an incredible achievement from everyone involved. I’m absolutely thrilled.”

Dennis Olsen ( 911 GT3 R #912): “Incredible! That one word actually sums it all up. We all worked hard for this win. Ultimately, it was about Matt’s performance in the final stint. How he fought for the lead was nothing less than amazing. I still can’t quite put my feelings into words. I guess it first has to all sink in.”

Romain Dumas ( 911 GT3 R #911): “We were fast, constant and strategically well positioned with our 911 GT3 R. I drove a double stint early this morning with one set of tyres. That would have given us the benefit of fresh tyres at the end. Unfortunately we couldn’t reap the rewards of the entire team’s hard work. The fact that something breaks at such a gruelling long distance race is simply part of racing. You can’t do anything about that.”

Sven Müller ( 911 GT3 R #911): “The Bathurst track is awesome. It’s a little like the Nürburgring-Nordschleife – I like it. I had some exciting, tough duels during my stint and it was great fun. At times we were in the lead. Unfortunately we got the news that the power steering had a defect. And unfortunately we were out. Congratulations to our colleagues in the No. 912 car.”

Mathieu Jaminet ( 911 GT3 R #911): “We started into the race from twelfth on the grid and ploughed our way up the field. We kept out of trouble and drove our laps flawlessly. That earned us the lead. Unfortunately, about three hours before the flag, the power steering went. Luckily I managed to keep the car on the track. It’s too bad that we were thrown out of contention. But we’ll tick this off and look ahead.”

Kévin Estre ( 911 GT3 R #12): “The most important thing is that our teammate “CJ” is doing okay. It was a really hard impact in a passage where you reach over 200 km/h. Even if something small goes wrong there, it’s over. For me it’s a shame, of course, because this is the second time in four years that I didn’t get a chance to drive here at Bathurst because of an incident.”

Jaxon Evans ( 911 GT3 R #12): “I enjoyed my first race as a Junior. I found the first stint at dawn particularly impressive. We were going well in the race and our pace was good, but unfortunately my teammate had an accident. That’s Bathurst, something like that can happen to anyone here. One tiny mistake often has big consequences. Of course I’m sorry for Kévin who didn’t get to drive a single lap in the race.”

Brenton Grove ( 911 GT3 Cup #4): “We did a flawless job. There’s not one scratch on our car after twelve hours of racing. And that’s exactly what makes the difference in this race. We were totally concentrated, we simply let the heavy GT3 traffic go, and got the most of our car in the gaps that appeared. That’s how you score a class win at Bathurst.”

This is the Intercontinental GT Challenge

The 2019 Intercontinental GT Challenge calendar is made up of five endurance race on five continents. While the teams are only permitted to field 2018-spec GT3 cars at the season-opening round in Bathurst (Australia), the latest generation is allowed at the following races in Laguna Seca (USA), Spa-Francorchamps (Belgium), Suzuka (Japan) and at the season finale in Kyalami (South Africa). will not compete with a factory squad in the international racing series for GT3 vehicles, but will instead support different customer teams in their campaign.