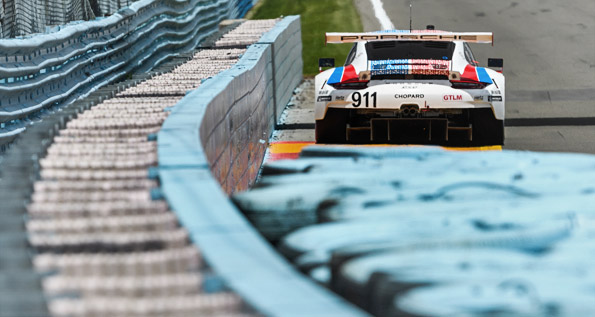 Stuttgart. After four straight wins, the GT Team travels to round six of the IMSA WeatherTech SportsCar Championship at Bowmanville as the leader of the manufacturers’ and drivers’ classifications. At the only Canadian event of the year, the North American works team fields two 911 RSR in the hotly-contested GTLM class. At the race in the Canadian state of Ontario, the ca. 510 hp nine-elevens from Weissach will again feature a livery reminiscent of the legendary North American customer team, Brumos Racing. In the GTD class, the customer teams Pfaff Motorsports and Park Place Motorsports each field a 911 GT3 R.

The race
The Canadian Tire Motorsport Park, more commonly known as Mosport, was opened in 1961 near the metropolis of Toronto. A total of eight Formula One Grand Prix were held here on the 3.957-kilometre circuit between 1967 and 1977. The flowing layout with many crests, dips and just ten corners allows a high average speed. has a long tradition at this racetrack in the Sportscar Grand Prix, previously known as the Grand Prix of Mosport. The sports car manufacturer from Weissach notched up seven overall victories and 17 class wins. In the 2015 season, the GT Team won the GTLM class with factory drivers Nick Tandy (Great Britain) and Patrick Pilet (France).

The drivers
The winners of the Sebring and Watkins Glen races, Patrick Pilet (France) and Nick Tandy (Great Britain), share the No. 911 911 RSR. The pair currently ranks first in the drivers’ classification. Their works driver colleagues in the No. 912 sister car, Earl Bamber (New Zealand) and Laurens Vanthoor (Belgium), are just one point behind the leaders after their victories at Long Beach and Mid-Ohio. In the GTD class, two 500+hp 911 GT3 R will compete. The customer team Pfaff Motorsports (No. 9) tackles its home round with the Canadian drivers Zacharie Robichon and Scott Hargrove. works driver Patrick Long (USA) shares the cockpit of the No. 73 vehicle run by Park Place Motorsports with his compatriot Patrick Lindsey.

The vehicles
For its third racing season in North America, the 911 RSR has undergone further optimisation primarily in the setup. Depending on the size of the restrictor, the engine, which is positioned in front of the rear axle, puts out around 375 kW (510 hp). The large rear diffuser combined with a top-mounted rear wing provides aerodynamic efficiency and significant downforce. The 911 GT3 R was newly developed for the 2019 season. Improvements in the areas of aerodynamics and kinematics were systematically implemented from the insights garnered from the many race outings of its predecessor. The six-cylinder engine in the rear of the GT3 customer racer produces over 368 kW (500 hp).

The schedule
The race takes off on Sunday, 7 July, at 1:05pm local time (7:05pm CEST) and can be viewed live outside the USA and Canada on www.imsa.com.

Comments before the race

Pascal Zurlinden (Director GT Factory Motorsport): “We’re riding on the crest of a wave with our successes in the IMSA series after four victories in a row. We’d like to continue this streak at Mosport to consolidate our position in the championship and ideally extend our lead further. Our 911 RSR should again be one of the hot favourites to win the GTLM class on the fast, tradition-steeped course in Canada.”

Steffen Höllwarth (Programme Manager IMSA SportsCar Championship): “Our busy weeks continue without a break. After the Le Man race we had only a few days to prepare the two 911 RSR for Watkins Glen. We won there. For this reason, I’m certain that our experienced team will do another perfect job in the tight lead-up to the race at Mosport. We’re heading to Canada as the leaders and we want to be in the same position when we leave.”

Patrick Pilet ( 911 RSR #911): “In the 2015 season, Nick and I won the race in Canada; last year we narrowly missed out on another victory. One thing is certain: always performs strongly on this very special racetrack. Most of the drivers love the circuit because it feels like a rollercoaster – incredible fast and demanding. Since overtaking is very difficult here, it’s particularly important to qualify well. We want to start from the front of the grid and stay at the front.”

Nick Tandy ( 911 RSR #911): “This track is high on my list of personal favourites. We were really quick here last year and this time we are determined to win. Our Watkins Glen victory underlined that we’re back in IMSA mode after the strenuous Le Mans race. This bodes well for the race at Mosport.”

Earl Bamber ( 911 RSR #912): “The Canadian Tire Motorsport Park is a favourite amongst all drivers. Our 911 RSR will definitely be strong there. The upcoming weeks in the North American IMSA series will be intense with many races within a short timeframe. We’re well placed in the championship and we want to earn maximum points in Canada.”

Laurens Vanthoor ( 911 RSR #912): “After our somewhat disappointing result at Watkins Glen it’s good that the next race is scheduled just one week later. The track layout not far from the city of Toronto is fantastic. We’ll have a good chance of further success there with our 911 RSR.”

Zacharie Robichon ( 911 GT3 R #9): “The race will be very special for us, as it’s the only home event of the year for Pfaff Motorsports. The racetrack is only about an hour’s drive from our team headquarters. We expect huge support from the fans. Scott and I are very familiar with our Canadian racetrack, so we should have a good chance in front of home crowds.”

Patrick Long ( 911 GT3 R #73): “The only foray to neighbouring Canada is always a great pleasure for us every year. The track, which still goes by the historic name of Mosport amongst fans, is one of the quickest and most traditional in the whole world. The teams and drivers come under huge stress, you need a car with a lot of downforce and you have to have complete trust in it. We’ll try to qualify as far up the grid as possible, because there are very few places to overtake here.”

This is the IMSA SportsCar Championship

The IMSA SportsCar Championship is a sports car race series that has been contested in the USA and Canada since 2014. The series originated from the merger of the American Le Mans Series and the Grand-Am Series. Sports prototypes and sports cars start in four different classes: GTLM (GT Le Mans), GTD (GT Daytona), Dpi (Daytona Prototype international) and LMP2 (Le Mans Prototype 2). The 911 RSR runs in the GTLM class, and the 911 GT3 R contests the GTD class.

Currently, we are still obliged to provide the NEDC values, regardless of the type approval process used. The additional reporting of the WLTP values is voluntary until their obligatory use. As far as new cars (which are type approved in accordance with the WLTP) are concerned, the NEDC values will, therefore, be derived from the WLTP values during the transition period. To the extent that NEDC values are given as ranges, these do not relate to a single, individual car and do not constitute part of the offer. They are intended solely as a means of comparing different types of vehicle. Extra features and accessories (attachments, tyre formats, etc.) can change relevant vehicle parameters such as weight, rolling resistance and aerodynamics and, in addition to weather and traffic conditions, as well as individual handling, can affect the fuel/electricity consumption, CO₂ emissions and performance values of a car.